The One Who Writes in Dust

Posted on October 5, 2019 by pastorpstephens 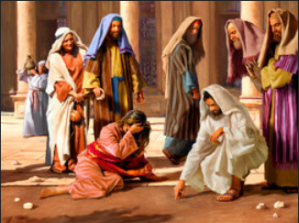 They brought the woman to Him,
And threw her at His feet.
They demanded to know His judgment,
And anticipated His defeat.

She had been caught in the very act,
And by her own actions stood condemned.
And now the fate of her life,
Rested entirely upon Him.

Would He follow the Law,
Would He sentence her to death?
Or would He decide to let her go,
And fail the Pharisees’ test?

He knelt and wrote in the dust,
Words that today are still unknown,
He invited them to step forward
The one without sin to cast the first stone.

He continued writing in the dust,
And one by one they slipped away.
The woman was the only one remaining,
To hear the words He had to say.

Who remains to condemn you?
Do you see your accusers from before?
Neither do I condemn you,
Go and sin no more.

We still don’t know what words were written,
By the Lord in the dust that day.
But He proclaimed love and forgiveness,
As He sent her on her way.

This woman was not condemned,
She received His Mercy and His Grace.
Nor were her actions condoned,
He would later die in her place.

Like this woman we are all guilty,
And by our own actions stand condemned,
And like this woman at His feet,
Our fate rests entirely upon Him.

Will we accept the gifts of Grace and mercy,
Offered by Him who died for us?
Will we receive as Lord and Savior,
The One who kneels and writes in the dust.

I have been blessed to have served as a pastor, a chaplain and to have been involved in other ministries throughout the years. My wife Marta and I have been blessed with a wonderful family that includes our daughter, her husband and their two daughters and our son and his wife and their son. Each of them are very special to us so please keep them all in your prayers. One truth that I always try to share with people I meet is that anything God asks you to do, He will help you to do. God has your back.
View all posts by pastorpstephens →
This entry was posted in Christianity, Church, Draw close to God, faith, Filled with Grace, God's Grace, God's Love, John 8:11, Paid for our sins, Past mistakes, Poem, poetry and tagged Christianity, forgiveness, God's Grace, inspirational, John 8:11, Paid for our sins, Past Mistakes, Poem, poetry, religion. Bookmark the permalink.